The availability of high-quality datasets became a research prerequisite for almost all scientific fields even the political sciences.

Datasets for diplomatic interventions and efforts in civil war conflicts have enriched the civil war literature.

In this blog post, I will introduce a sample of the most famous datasets in the field of civil war literature, armed conflicts, organized violence, and peace agreements.

It is free of charge database that could provide information seekers with detailed data about armed conflicts, peace agreements and other sorts of organized violence since 1946 and onwards. The database is updated and maintained by Uppsala Conflict Data Program (UCDP) and is available at: http://www.ucdp.uu.se/, Uppsala University.

You can get the needed data through navigating through two different views. You can access the two views (“Fatalities View” and “Countries in a Conflict View”) by selecting one of the two tabs found on the upper right corner of the main page. 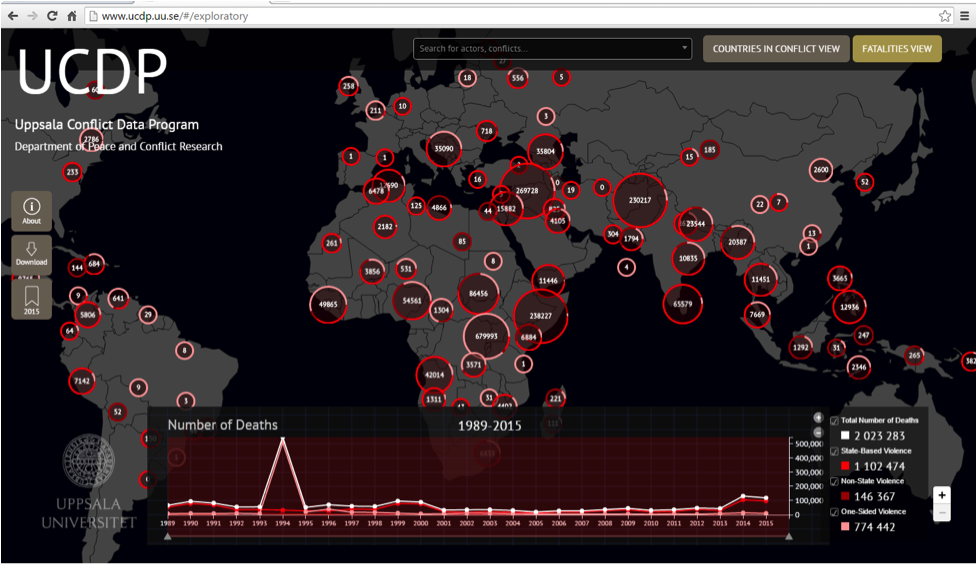 Here is another screenshot from the Uppsala Conflict Data Program (UCDP) website – Countries in Conflict View – accessed 16 August 2016. I chose Syria just to give the reader an idea about the data visualization methodology. The results could be filtered according to the type of conflict or the actor. There are different options for filtering the query results. 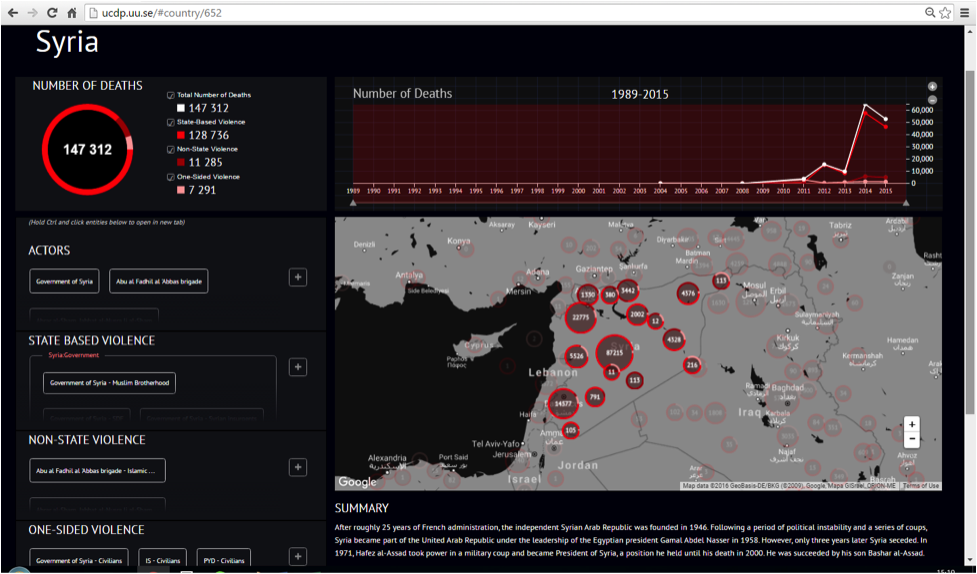 The Peace Research Institute Oslo (PRIO) focuses on peaceful relations between states, groups, and people as a research area.

On the PRIO website, you can find different datasets. Some of them are related to:

It just provides the location (coordinates of the armed conflicts), so we can consider it as an extension to the UCDP/PRIO database.

The dataset is available at:

This dataset is concerned with finding a relation between religious cleavages and the duration and intensity of internal conflicts. The dataset is available at:

It contains data for battle death during wars or violence conflicts.

The dataset is available at:

Onset and Duration of Intrastate Conflict

You can obtain the data about this topic in 3 forms:

The three datasets are available at:

It contains information on armed conflict where the government represents one side of the conflict. The dataset covers the time period 1946-2014. The most recent is version 4-2015.

The dataset is available at: http://www.pcr.uu.se/research/ucdp/datasets/ucdp_prio_armed_conflict_dataset/

It contains information on armed conflicts where the government represents one side of the conflict. The dataset covers the time period 1946-2014. The most recent is version 4-2015.

The dataset is available at: http://www.pcr.uu.se/research/ucdp/datasets/ucdp_prio_armed_conflict_dataset/

COSIMO database is concerned on recording information on political conflicts since 1945 till now. The project is hosted by Heidelberg Institute for International Conflict Research (HIIK). You can explore the related datasets at: http://hiik.de/en/verein/

What software will I need to deal with armed conflicts literature datasets?

It depends on the extension or the type of the file you will download and work with. I can summarize the most common types in the following table:

Terminologies and acronyms wherever you go

There is a very nice Book for Mayeul Kauffmann, called “Building and Using Datasets on Armed Conflicts”. The book focuses on the purposes for building conflicts and civil war datasets, concepts and data building for terrorism and abduction databases, in addition to many other interesting and important topics.

A preview for the book is available at Google Books at:

Data Evolution: Tips on Keeping Reusable Data Up to Date

David Talby
Having the most fresh, up to date data at your fingerprints makes analysis more relevant and accurate. When data is updated, you...