We are very excited to release Annotation Lab v1.4.0 which brings a lot of new features around Users and Tasks management, performance improvement, security, and bug fixes. Here are the highlights of what we have included:

A huge number of extractions for a task often led to web browser rendering issues. To solve this, we are rolling out the Pagination feature for text-based projects. For using this feature, users need to define page break on the input text using the <pagebreak> token as the separator between two pages.

The labeling page will show pagination only if the task had the page break token while it was imported.

If an existing task is huge and has many extractions, and users need to paginate it for improved performance, they should export it first, add the page break token, and import it again. Users are requested to be careful while adding the token, because introduction or deletion of any character (even whitespace) may lead to extractions rendering issues.
While exporting the completions, the pagebreak tokens will be dropped from the text.
We do not support pagination for long scrollable texts yet, which we plan to send on the next release.

To enhance our API support, we have changed two APIs (Projects List and Tasks List) so that they respond with JSON results rather than HTML. These are added to swagger documentation.

We have removed all the granular permissions scopes (View, Delete, Update, etc.) and introduced three distinct roles in the context of a project: Annotator, Reviewer, and Manager. These are going to be very useful for most of the workflows that our users follow. From the Setup page, now Project Owner can add users to a project as Annotator, Reviewer, and/or Manager.
A Manager is someone who can work on behalf of the Project Owner. A user with this role can assign tasks to users (who are added to the current project) as an Annotator and/or a Reviewer. This helps distribute the workload from the Project Owner.

For the existing Annotation Lab customers, all the users who are shared a project will be assigned as Annotator and Reviewer role after upgrade to this version. If required, they need to be manually removed by Project Owner after the upgrade.

The analytics dashboard got the corresponding changes. 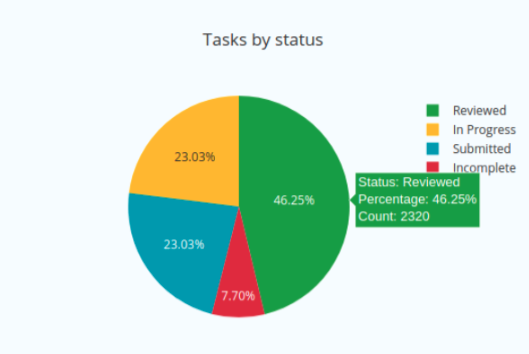 In the previous release, Reviewers were not able to see the ground truth icon on submitted completions. We have now allowed them to see that.

We have added Project Owner’s name and created the date on Project List Page. With this change, the Completed and Pending counts are removed.

Dia Trambitas
With the release of Annotation Lab v1.3.0 our users have access to new features related to task management.  A project admin can...